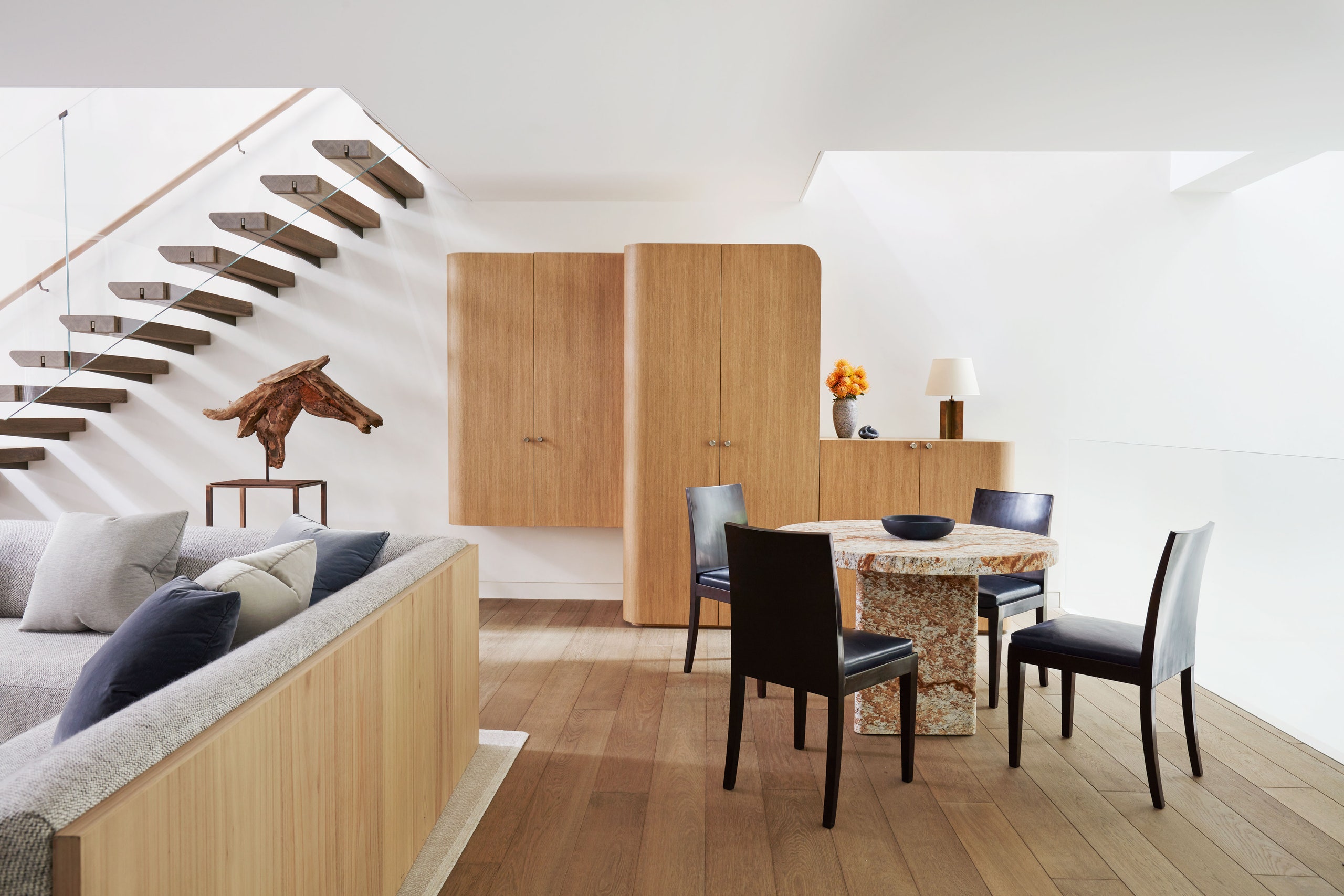 From the street, this elegant 19th-century brick house looks like many of its neighbors in New York’s historic Greenwich Village. But when you open the front door, you realize that the soaring, light-filled space you’ve entered is very much of the present. That was precisely what the house’s owners sought when they hired New York architect Lee Skolnick and the San Francisco–based AD100 designer Steven Volpe to transform what had been a traditional interior into something much more modern.

The owners told both Skolnick and Volpe that they wanted “an urban oasis, a place of quiet and repose.” Moreover, they, like Skolnick (whose monograph Skolnick Architecture + Design Partnership: Public/Private will be published by Pointed Leaf Press next month), wanted the house to open to views of neighboring gardens, a particularly pleasant feature of the area. Having designed houses for both artists and collectors, the architect responded with a design that he calls “a vertical loft” and “a light machine.”

Skolnick, whose team included Paul Alter, a partner in the firm, and Joern Truemper, the project architect, likens the individual floors—two of which end in mezzanines—to “trays” that are surrounded by light, which comes down from the top of the stairway of the five-story house to the first floor. The all-glass rear façade also illuminates the lower level, with its open kitchen and formal dining area looking directly into a tree-lined courtyard.

Volpe is known for sophisticated interiors that mix cutting-edge 20th-century and antique pieces with understated chic. Fittingly, he and Ralph Dennis, his firm’s design director, orchestrated a deft blend of furnishings by icons like Jean-Michel Frank, Eyre de Lanux, and Madeleine Castaing, pieces by noted contemporary designers like Pierre Charpin, Martin Szekely, and Ronan and Erwan Bouroullec, and custom upholstery and cabinetry. Responding to the owners’ wish for “open spaces, lots of light, and an emphasis on tones of white and sumptuous textures,” Volpe explains, “We tried to create rooms that are modern, but not cold.”

The two-story living room is the house’s centerpiece; extending from front to back, it ends in a mezzanine that overlooks the kitchen-dining area and out to the rear garden. In this space, with its oak floors and walls of white hand-­troweled plaster, Volpe and Dennis used pale, neutral, and luxurious fabrics, some of them custom-made by the Brooklyn-based weaver Tara Chapas. Since the front door opens directly into the space, it is partly obscured by a screen, of Murano glass and metal, which Volpe commissioned from the artist Ritsue Mishima. On the wall opposite the screen, a mirror by Line Vautrin hangs above a marble console by Charpin. A corner of the room with a view into the garden is an informal dining area, with a granite table commissioned from Szekely, surrounded by four Frank chairs, and an elegant, Studio Volpe-designed oak cabinet.

At the far end, an impressively scaled custom version of the Bouroullecs’ Chains light cascades down from the ceiling toward the large bespoke walnut dining table on the level below. Here the floors are limestone indoors and out, and the minimalism of the glass wall and its sliding doors, all of which were made in Portugal, is particularly pronounced. “The house is all about the details and how materials come together,” Skolnick notes, and this is evident in elements like the stairway’s oak treads, which appear to float, or the meticulous construction of a cutout in a wall that accommodates the handle of a pocket door. The homeowners agree and call attention to such subtle features as the tactile oval shape of the wooden stair railings.

A flight of stairs leads from the living room to a mezzanine media room with a custom sofa, a Paul Frankl coffee table, and a vintage chair made of Brazilian walnut plywood. For the adjacent powder room, Studio Volpe designed a marble vanity and perforated marble wall behind it, on which hangs a mirror by Charpin. A corridor leads back to a home office, outfitted with a double desk designed by Volpe’s studio in powder-coated steel; the room looks directly into the garden’s trees. One floor up, the main bedroom features a custom-made bed, side tables by the French designer François Bauchet, and a dressing room with beechwood doors and custom-carved pulls designed to look like leather. On this floor, the glass rear wall slants back a nod, Skolnick says, to the artists’ garrets in the neighborhood—and creates room for a shallow balcony. And on the top floor, a small bedroom opens onto a roof terrace.

Skolnick and Volpe share an admiration for the way that traditional Japanese architecture skillfully frames views of nature, and in this house, nature is as ever-present as the neighborhood’s architectural context. Volpe likes the “cool warmth” of the interior, and Skolnick says that moving through it “is like a journey”—not just through architecture and light but through time and history as well. 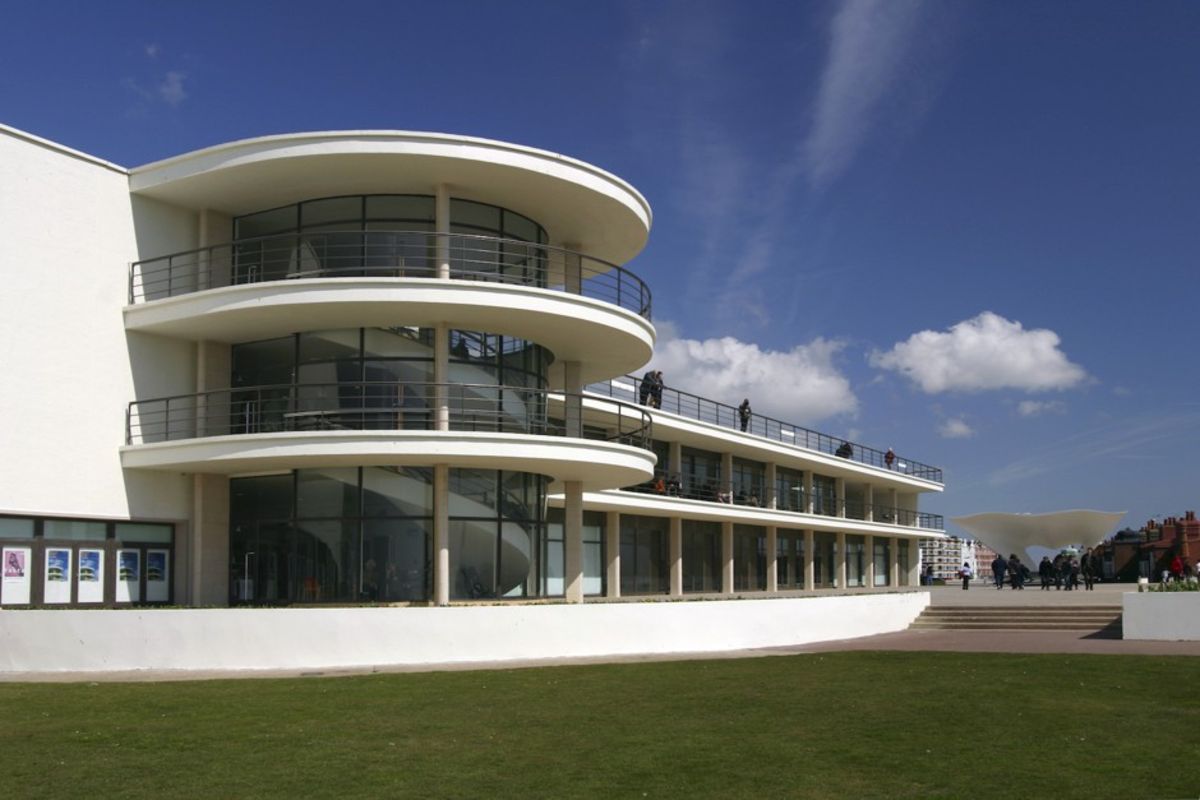 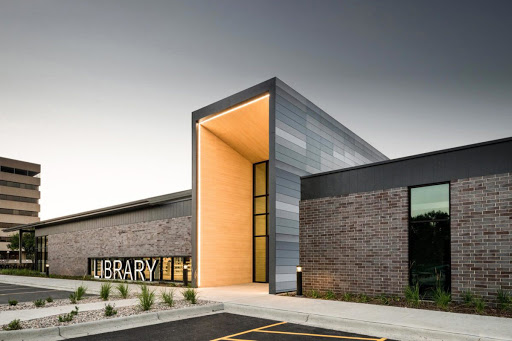